I'd meant to get to this well before I'm actually getting to it, but it's been a busier few months than I'd expected.


All that's a story for another time, though. For now, we're going to have a look at some things at Roubaix Lake, which was one of the places we went later in the week. I had more pictures than I'm sharing here, but I decided that they weren't up to snuff for what I wanted to do.

Roubaix Lake, like most, if not all, lakes in the Hills, is a man-made resivoir, which means there's a dam at one end of the lake, holding a stream back. I got some pictures from that part of the lake, but those will be towards the end of the post.

We'll be starting with the swimming beach, in part because I'm hoping to do this one like I did my Lake Alvin post some years ago. Here's the sign telling us the rules of the beach: 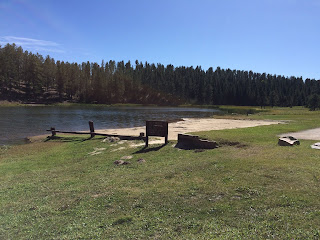 It turns out I wasn't as close to that sign as I had thought I was. In case it's hard to read, it says “No Fishing From Beach, No Dogs In Bach Area, Swim At Own Risk”. All reasonable things, of course. It's a nice beach, and fish hooks and dog waste can be unpleasant things to step on.

The view from the beach was nice, too: 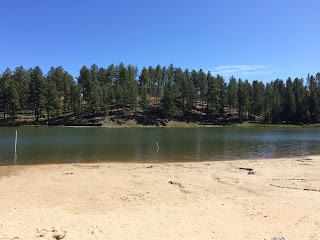 The forrest might seem a little thin on the far side of the lake, but from what I understand, that's what the Hills are kind of supposed to look like naturally. I also got a closer picture of the water. It looked nice, but since this was the end of September, it might have been a little chilly for a swim, even if I was braver about that apparent moss in the water. 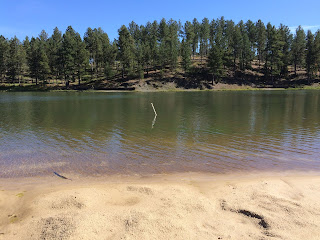 There were some interesting things dug or drawn into the sand: 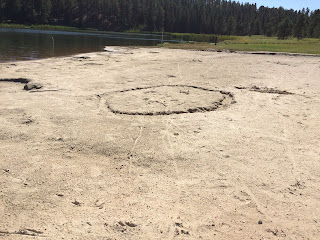 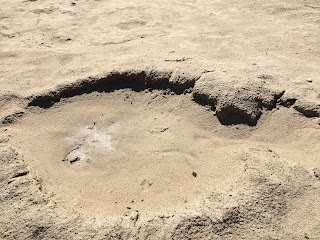 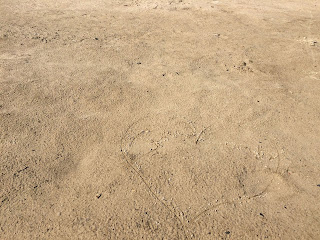 I can't exactly remember what the names were in that heart there. I think it was Jim and Sarah, but it's kind of hard to tell. It was still nice to see that it was still there at the end of September, though I don't know how long it had been there before I took the picture.

Next up is the picnic area and the restroom or outhouse: 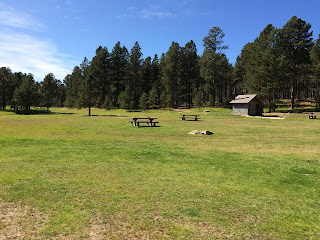 In spite of what I'm going to say in one of the next ones of these, this is what I think of when I think of picnic areas at the recreation areas in the Hills. I was going to try using the restroom there, but it was already closed for the season. That makes sense, though, because it was the end of September, and nobody was going swimming.

Since it was closed, I thought I'd see what was up with what looked like the changing rooms. 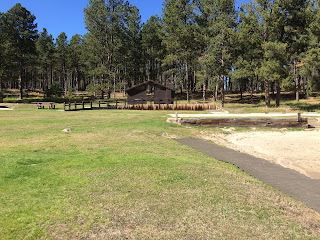 These also had doors and walls for some privacy, as well as some mechanical room doors. It was all locked, too, mostly because of end-of-season stuff.

In part because this is a man-made lake, only non-powered boats are allowed on the lake. This means the likes of canoes, kayaks, and certain inflatable rafts are allowed, but not larger boats with motors. All the same, the state Game, Fish and Parks Department put up this handy reminder sign about life jackets: 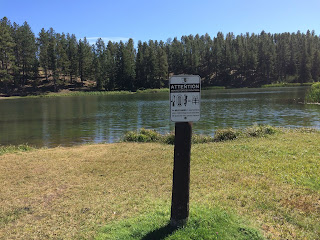 After having a look at that sign, I decided to go try using the outhouse, but it was closed. Found that out just after I took this closeup: 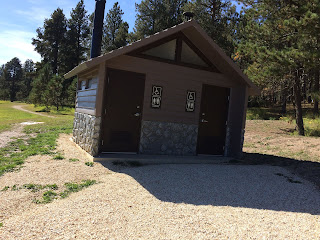 It's a cute little building, for what it is. It's a pre-fab building, but I'm not sure if it's concrete or a synthetic of some kind. The good news is that the campground was still open for visitors even that late in the year, which meant that the facilities were open there. It was a bit of a walk, especially for someone who's in as terrible shape as I am and not used to the altitude there. I needed to stop for a rest along the way, and braced myself against a tree for a couple minutes. When I pulled my hand back to start walking again, I saw this: 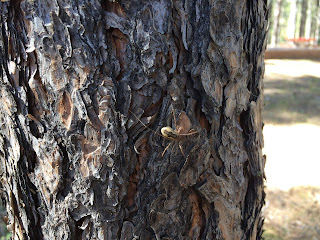 I'm not sure how close I actually came to my little arachnid friend here, but I'm glad I didn't crush him and/or get myself bit in the process. Spiders are actually good things to have around, in general, and spider bites are unpleasant to say the least. Where I was going was this outhouse, in the campground: 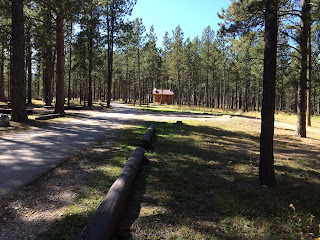 This one's actually made out of wood, and the interior lights are solar-powered: 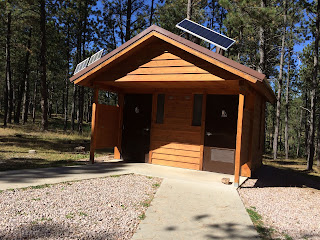 It was very nice for what it was. Very clean, pleasant to use, all things considered. I think part of the reason for that is people actually follow this advice: 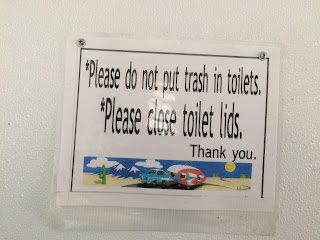 There were units like this at other places that I'll get to later that were completely the opposite of this. And speaking of opposites, here's what the other end of the lake, near the dam, looks like: 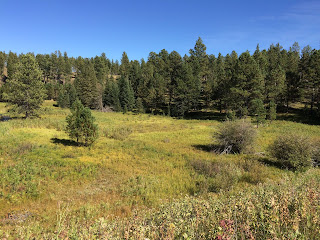 It's a nice area for looking around at nature. I kind of like that. It's also a good place to fish. This was a good year for trout there: 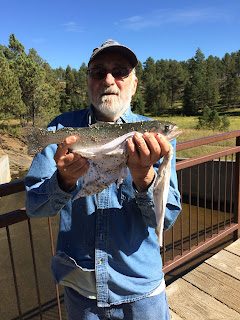 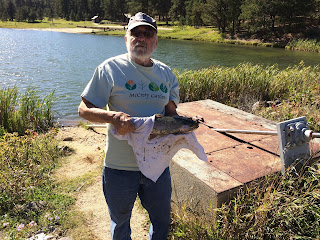 My dad did most of the fishing, and caught five total, that he wound up letting another fisherperson at the lake have.

All in all, this was one of the highlights of the trip. I'm glad I had the chance to go see and do this. It was a good getaway from work, too. In the end, I really enjoyed this. With any luck, I might get a chance to go again some time.
Posted by Jesse at 8:30 AM