Originally written in the early to mid 1990s and redone several times since, here's "A Tellah Story", along with a title page I did for it in high school. 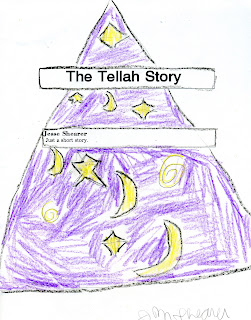 A Tellah Story
By Jesse Shearer

One day, a skilled fisherman and magic user named Tellah was walking along the shore of his best fishing lake. Noting that there were many dead fish along the shore, he realized that something must be done to save his business and, of course, his family.

First, he separated the fish by species and then used his magic to remove the dead and rotten fish from the ones suitable to be brought back to life. This took the better part of a day and drained the man of strength. Fortunately, though, Tellah had brought a tent to rest and spend the night in.

With Tellah the next morning was a beast-summoning friend who had come to help finish the job. With her help, the fish were restored to life and Tellah and his family were saved.

As time passed and his powers grew, Tellah learned that he would soon have to pass to a higher level of learning. This meant a trip up the dreaded Mount Ordeals. When the time came, Tellah made his trip and returned with the power to learn the advanced spells he desired.

It was also time for his daughter, Anna, to go on a journey of her own. Anna had met and fallen in love with a bard about her own age named Edward. Edward, of course, was the Crown Prince of Damcyan in disguise. Unfortunately, Tellah did not approve of their relationship, and the two eloped to Edward's home, Damcyan Castle. Within a month, Anna was dead, after having saved Edward from an attack by the power hungry nation of Baron. This brought grief to those who loved her. Such is life's cruelty.